Although difficult, it is necessary to separate emotions from selling your home.

WHEN Matthew White, a landscape architect, decided two years ago to sell his 1,300-square-foot apartment in Philadelphia, he knew real estate prices were plummeting. Nevertheless, he thought he could get $760,000, about what he had paid two years earlier, because he had made many improvements to the space, an airy penthouse with two verdant terraces.
Skip to next paragraph
Enlarge This Image 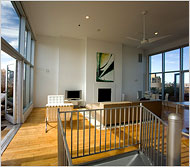 Now he can’t get $450,000 for the apartment, despite the fact that it has amenities like a roof deck off the living room.

“It’s an incredible property, with spectacular views,” he said. Within a month, he got what he considered an “insulting” bid of $525,000. Five price reductions later, he wishes he had taken that offer. “I wasn’t realistic about what I could get,” said Mr. White, whose apartment is currently listed for $449,900. “It is such a special place, but now I realize that doesn’t matter during a recession.”
Even in the best of times, it’s hard for individuals to objectively value their homes, which often reflect their sense of self and personal style. Making things even more difficult has been general market inactivity lately, if not paralysis, which has provided little in the way of pricing guidance. But by using online resources, investigating neighborhood trends, consulting real estate experts and perhaps even asking the opinions of brutally honest friends, homeowners can arrive at a reasonably accurate appraisal even in these uncertain times.
A good place to start is your local tax assessor’s or county clerk’s office, many of which post real estate transactions on their Web sites. Links can be found at onlinedetective.com (parts under construction) and netronline.com. Those records will tell you what has recently sold in your neighborhood and for how much. Look for comparable homes with similar features and square footage.
Be aware that prices may not always totally reflect reality. “The house could have been sold to a sister or been part of a larger transaction,” said Dean Gatzlaff, a professor of real estate investment and urban economics at Florida State University in Tallahassee, like maybe a 1970s Eldorado convertible was thrown into the deal.
People living in “nondisclosure” states (Alaska, Idaho, Indiana, Kansas, Louisiana, Maine, Mississippi, Missouri, Montana, New Mexico, North Dakota, Texas, Utah and Wyoming), where the sale prices of homes in most jurisdictions are not public information, have to approximate by looking up mortgages on transferred deeds of trust and factoring in typical down payments and interest rates. In any event, don’t trust tax appraisals, as they are notoriously inaccurate.
“Look for sales within the last two to three months if there are any,” said David Kupfer, a real estate agent with Keller Williams in Phoenix, where prices in some neighborhoods have fallen as much as 50 percent in the last two years. “Six months ago is obsolete,” he said, because markets have been changing so rapidly.
Indeed, real estate agents and appraisers from Manhattan to Menlo Park said they now consider sales figures older than six weeks unreliable. Other sources of information are free online home value estimators on sites like zillow.com, trulia.com and forsalebyowner.com. But these derive some of their information from public records, including tax appraisals, and are thus subject to error. A test of those sites using various residences nationwide provided valuations that ranged from exactly right to incredibly inflated. Most estimates, however, were within the rough range of reality.
Compare the estimates with prices of homes on the market now. “These are your direct competition even if the homes are foreclosures” or fire sales by distressed home builders, said Jim Amorin, a real estate appraiser in Austin, Tex., and president of the Appraisal Institute, a trade organization. “That’s hard for a lot of people to accept,” he said, when their homes weren’t abandoned, repossessed or otherwise forsaken.
Leonard Calandriello, a retired banker in Chandler, Ariz., said he felt “entitled” to $500,000 for the 1,975-square-foot town house he bought new in 2007 for $470,000, then upgraded with enhancements like plantation shutters and a travertine patio, spending another $30,000. But with nearby foreclosures and the developer of his community cutting deals, he has had to reduce his asking price twice since May, to $399,000. “We may have to come down more,” he said. “Psychologically it can really get you down.”
Real estate experts recommend that homeowners do as Mr. Calandriello did and attend nearby open houses to see how their homes compare in size and amenities. But be realistic about what truly adds value and perhaps consult the Marshall & Swift Residential Cost Handbook, which professional appraisers use to assess how much, say, a fireplace or three-car garage is worth. The $300 tome is available in some business school libraries, but you can also pay $10 to use the SwiftEstimator at swiftestimator.com, which lets you do an item-by-item calculation of the value of your home.
The attractiveness of construction and design elements is subjective, so experts said it might be as meaningful to poll your most straight-talking friends. “You may love your new sauna and think it’s a wonderful and attractive feature, but someone else may not care, or even think they need a deduction so they can rip it out,” Mr. Amorin said.

Recommend More Articles in Home & Garden » A version of this article appeared in print on November 5, 2009, on page D1 of the New York edition.

Get your Instant Home Value…

Got a question? We are available …

Got a question about this property?

Oops! We could not locate your form.